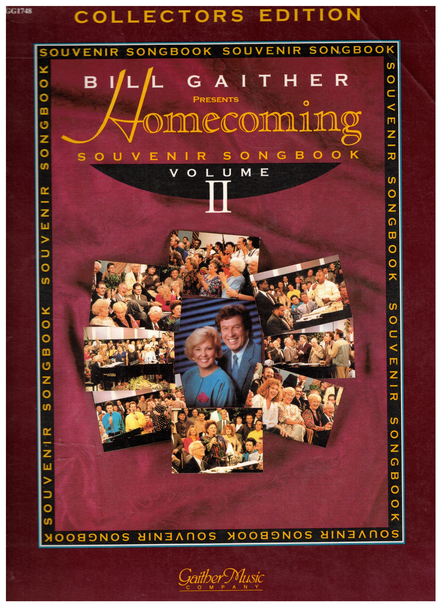 A very nice, copy of the songbook, "Collectors Edition Gaither Homecoming Souvenir Songbook Vol. II by Bill Gaither and edited by Harold Lane.  A very nice copy of the 1994 edition of the Bill Gaither Homecoming Souvenir Songbook, known as Volume Two of the series of songbook commemorating the gathering of Southern Gospel artists that had it's beginnings  On February 19, 1992, the Gaither Vocal Band had just wrapped up a recording session in a Nashville, Tennessee, working on an album called Homecoming, which featured many of the great voices of southern gospel music: The Speers, the Gatlins, Jake Hess, The Cathedrals, Howard & Vestal Goodman, Buck Rambo, Eva Mae Lefevre, James Blackwood, Hovie Lister, Jim Hill, and J.D. Sumner & The Stamps. After the session, the artists stayed around to chat, swap stories and sing old standards around the piano. The impromptu session was recorded on video and later published. The recording was so well received that Gaither began a series of professionally produced videos with larger gatherings of gospel musicians.  A collectible songbook of classic Southern Gospel.  166 pages with Fast  and Free Shipping!