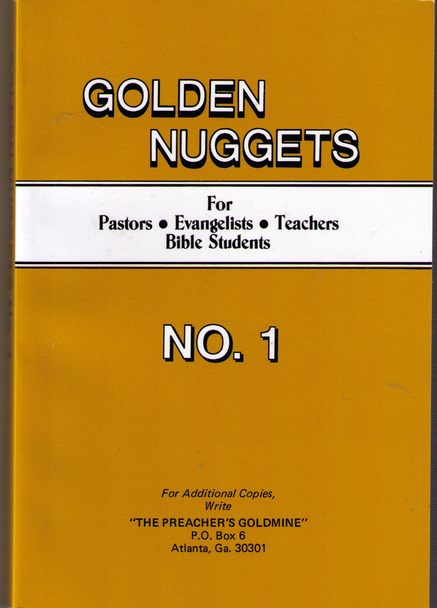 The Golden Nuggets series was originally published in 30 volumes from 1965-1994, and contains every outline included in “The Preacher’s Goldmine” during those years. Each volume contains a full year’s worth of material, including 192 full page outlines, and 132 condensed outlines.

“The Preacher’s Goldmine” was a monthly publication containing a wealth of sermon outlines and helps for preachers and Sunday school teachers.

It was edited by Maze Jackson, the host of Broadcasting for Jesus and The Truck Driver’s Special radio programs, and continued by his wife Dot, and son Nolan, after Brother Maze’s death in 1996.

This first volume of the collection includes 324 sermon outlines from the year 1965, covering a wide range of topics. Each outline includes carefully composed themes, supporting points, and Scripture references.

MSRP:
Now: $180.00
Was:
This collection contains the complete thirty volume set of Golden Nuggets. The Golden Nuggets series was originally published in 30 volumes from 1965-1994, and contains every outline...

Whale of a Tale CD

MSRP:
Now: $15.99
Was:
Along the rocky coast of a New England whaling town a lighthouse shines brightly into the darkest night. Mobsters, busybodies, and poachers plot to put out the light once and for all. Can the crew of...

MSRP:
Now: $12.00
Was:
This study course has long been an excellent and popular assistant for group and personal Bible studies, sermon preparation and Sunday school classes. It features 100 comprehensive outlines of...

MSRP:
Now: $49.99
Was:
Produced as a replacement for the Church Covenant Wall Chart, now out of print, published by Broadman Church Supplies. Contains identical wording, and a very similar design, along with...

The Glory Due His Name

MSRP:
Now: $12.95
Was:
A Study on Psalms 25-37.As you read each of these Psalms, may the Lord speak to you. Listen to His voice with a detirmination to obey Him. The book has been written with the intention for the readers...