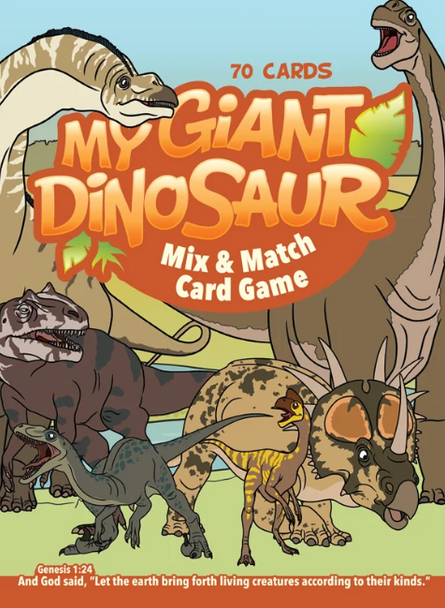 The Bible tells us in Genesis 1:24 that God created the earth's living creatures on Day 6 of the creation week. Dinosaurs would have been made on the same day! God created them, both male and female, after their own "kind."

My Giant Dinosaur Card Game is a fun way to march up "two of a kind" dinosaurs from a biblical worldview. But watch out for that crazy "Sillysaurus." It's only "one of a kind" and will try to lose the game for you!

MSRP:
Now: $4.99
Was:
This mix and match card game allows a fun way to match up "two of a kind" creatures. But watch out for that crazy Sillysmilus. It's a one of a kind creature and will try to lose the game for you! 70...

MSRP:
Now: $9.99
Was:
My Giant Dinosaur Coloring Book is an oversized coloring book filled with scientific facts and huge dinosaurs to color in! Great for kids aged 4-8, this book features bold line drawings as well as...

MSRP:
Now: $2.99
Was:
Learn about dinosaurs with the My Giant Dinosaur Sticker Sheet. Designed for ages 4 years and older, this set includes 7 giant sticker pages containing 48 colorful dinosaurs plus a colorful insert...