The People That History Forgot 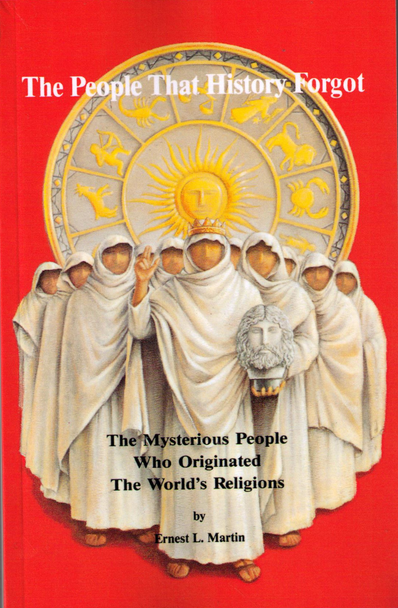 The People That History Forgot

This book is a fully documented historical work that identifies in a easy-to-understand manner just who the people were who originated the world's religions. It concentrates specifically on a particularly prominent people mentioned both in the Old and New Testament (who were very important in the time of Christ and the apostles) but are practically unknown today by most people. Even historians and theologians seldom mention the impact that these mysterious people have had on the development of Western Civilization. Dr. Martin has produced a major historical study that all wishing to understand the present political and religious environment of Europe should read.

This book takes away the curtains of mystery that have surrounded peoples over the centuries. For the first time, you will read about certain important European national groups recorded in the annals of history who have all but disappeared in the textbooks today. You will discover who the people were who settled much of southern Europe and gave us our type of Christianity that we witness in the world today. Indeed, this book gives a modern identity of an ancient people who are as important in historical and biblical matters as those who wrote the Dead Sea Scrolls. This is one book that all people interested in prophecy, doctrine and history should have.

The Temples That Jerusalem Forgot

MSRP:
Now: $29.95
Was:
Copyright 2000, ASK Publications Paperback, 486 pgs "This book is a result of my research that shows that the Temples of God in Jerusalem were indeed located over the Gihon Spring and not...

History Of The World (Teacher Guide)

MSRP: $24.99
Now: $19.99
Was:
Course Description: This 1-year course provides students with the opportunity to study the exciting, inspiring history of the Lord's church. In the first semester, students will use Taking the...

A Patriot's History Of The United States

MSRP: $27.00
Now: $21.60
Was:
Over the past decade, A Patriot's History of the United States has become the definitive conservative history of our country, correcting the biases of historians and other intellectuals who downplay...

MSRP: $89.95
Now: $79.95
Was:
Focusing on different types of government, LIFEPAC History & Geography shows the purpose and reason for law and order in society. Easy-to-grasp subjects are: International Governments, United...

MSRP: $24.99
Now: $19.99
Was:
Early American advocates of freedom did not believe in religious liberty in spite of their Christianity, but explicitly because of their individual faith in Christ, which had been molded and...

The Temples That Jerusalem Forgot

MSRP:
Now: $29.95
Was:
Copyright 2000, ASK Publications Paperback, 486 pgs "This book is a result of my research that shows that the Temples of God in Jerusalem were indeed located over the Gihon Spring and not...

MSRP:
Now: $27.95
Was:
Copyright 1996, ASK Publications [2nd edition] 455 pgs This book reveals brand new discoveries that precisely locate the site where Christ was crucified and resurrected from the dead. Some may say...

The Star That Astonished The World

MSRP:
Now: $23.95
Was:
Over 600 planetariums around the world have been showing the new discoveries recorded in this 280 page book. This research not only identifies what the real star of the Wise Men was, it also reveals...

He Maketh His Sun To Rise: A Look At Biblcal Geocentricity by Dr. Thomas M. Strouse

MSRP:
Now: $34.99
Was:
A very nice copy of the rare booklet, "He Maketh His Sun To Rise: A Look At Biblcal Geocentricity" by Dr. Thomas M. Strouse.  The Biblical Creationist movement has legitimatized the Christian...

Blessed is the Nation, by Walter Allan Yoho

MSRP:
Now: $16.00
Was:
Dragon legends are found in nearly every culture around the globe. They have been thought to be myths. Yet, mysteriously, these dragons sound a lot like the other giant scaled reptiles, dinosaurs...

Joshua: The Conquest of Canaan

MSRP:
Now: $12.95
Was:
Joshua had at least three purposes for writing about Israel’s conquest of the Promised Land:To document God’s faithfulness in fulfilling His covenant to give the Land of Canaan to His...

MSRP:
Now: $10.00
Was:
With more than 80% of young people giving into peer pressure, it’s not always easy for Christian teenagers to live for God and stand for what’s right. All too often they find themselves...