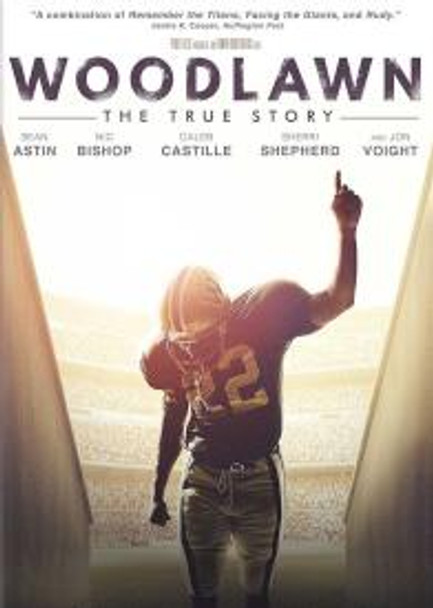 Rated PG In 1973, a spiritual awakening captured the heart of nearly every player of the Woodlawn High School Football team. A gifted high school football player must learn to boldly embrace his talent and his faith as he battles racial tensions on and off the field in WOODLAWN, a moving and inspirational new film based on the true story of how love and unity overcame hate and division in early 1970s Birmingham, Ala. Tony Nathan (newcomer Caleb Castille) lands in a powder keg of anger and violence when he joins fellow African-American students at Woodlawn High School after its government-mandated desegregation in 1973. The Woodlawn Colonels football team is a microcosm of the problems at the school and in the city, which erupts in cross burnings and riots, and Coach Tandy Gerelds (Nic Bishop) is at a loss to solve these unprecedented challenges with his disciplinarian ways. It's only when Hank (Sean Astin), an outsider who has been radically affected by the message of hope and love he experienced at a Christian revival meeting, convinces Coach Gerelds to let him speak to the team that something truly remarkable begins to happen. More than 40 players, nearly the entire team, black and white, give their lives over to the "better way" Hank tells them is possible through following Jesus, and the change is so profound in them it affects their coach, their school and their community in ways no one could have imagined.

MSRP:
Now: $7.99
Was:
The Printing is a family film produced by Unusual Films that tells the story of faithful Christians that continue printing and smuggling Bibles even when they know they are being hunted down by...

MSRP:
Now: $9.99
Was:
Starring Kirk Cameron, Fireproof is the inspiring love story of a firefighter, his wife, and a marriage worth rescuing. At work, Capt. Caleb Holt (Kirk Cameron) lives by the old...

Mama Prayed For Me CD

MSRP:
Now: $20.00
Was:
Recorded Live at Trinity Music City, Hendersonville, Tennessee. 1996 Release, Horizon Records Songs Include: Jesus, Lord Of All  A Voice Within  Following Him From A Distance  I Know...

How to Pray - Paperback

MSRP:
Now: $4.99
Was:
Known during his lifetime as a great prayer warrior, RA Torrey is eminently suited for this instruction. In a plain, easy style, he lays out all the functions of prayer for both public and private...

Rome's Responsibility for the Assassination of Abraham Lincoln [2-in-1]

MSRP:
Now: $12.00
Was:
Reprints of books that were written when original source material on the Assassination of President Lincoln was readily available.  The books are reproduced with as little editing as possible...

MSRP:
Now: $6.00
Was:
Compiled by Bob Brumley and Sharon Boles. This book includes songs that date from early 1800's to middle 1900's and is a book of traditional songs that came from our forefathers, depicting...